As promised here are some photos from Osler Castle. I am telling you this place is beautiful! You spend an entire day there, and not notice how long you spent there. There are trails everywhere, the old house and a lake to see. There is so much to see and explore. I can't wait to go back! 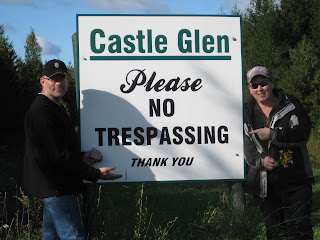 This is the sign that you see from the road. We were about to turn around, when another couple pulled up and said that it was fine to go up and see the old ruins. The castle is now protected by a barbed wire fence. 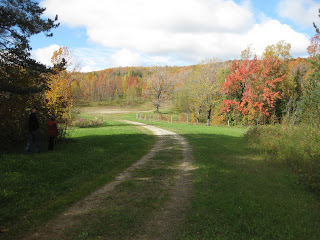 Here is the path leading down to the lake. You then hang a right where the path forks. The view from the lake is breathtaking! 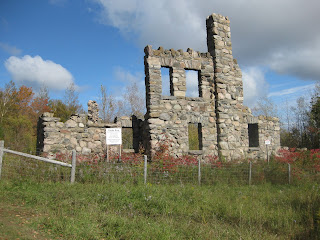 I would love to post all the photos of the castle, but alas there were too many( I would be here all day just waiting for them load! ). So I only chose this one to give you an idea of what it looked like! On the other side, to the right is an arch way as well. 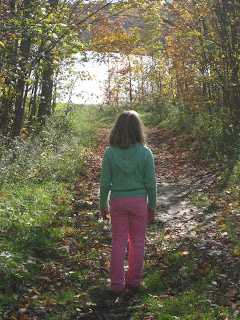 Anize walking along the path down from the castle. 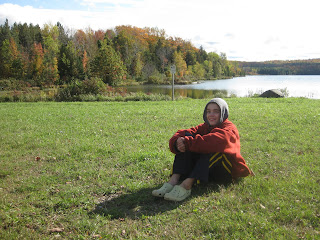 Here is Jared sitting down by the lake.
Here is an exert that I found online about the old house:

"Britton Bath Osler (1839–1901) was a famous Canadian criminal lawyer, and also the crown attorney at the trial of Louis Riel on charges of treason. He founded the law firm of Osler, Hoskin & Harcourt.

Mr. Osler was also a prominent figure in early . When his wife, Caroline, began to suffer ailing health, Osler decided in 1893, to build the 15-room Osler 'Castle' near the Town of Blue Mountain. Mr. Osler hoped that the 'fresh air' would improve her health.

Caroline named this summer home "Kionontio", a Petun Indian word for 'top of the hill'. Unfortunately Mrs. Osler's time in her new home was brief as she died in 1896. Mr. B.B. Osler later remarried and spent a few summers at the castle. He died in 1901 and the empty house was left to deteriorate.

A diary excerpt from the early 1900's read as follows: "while working in that area, I along with a group of friends made several visits to the property on Sunday outings. Not only were all the furnishings gradually being stolen, but people were helping themselves to the stone work as well. However, I assure you, we were not among the vandals."

While the property is owned by Castle Glen Estates development of the area has been stalled by environmental assessments. The reason is that there is an ecologically sensitive lake in close proximity to the site. It is hoped that this structure will be saved from demolition."
Posted by Shirley at Sunday, October 24, 2010